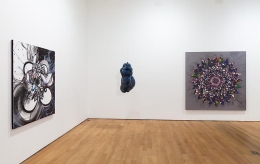 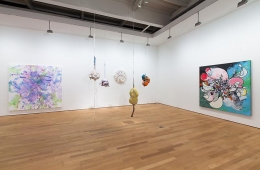 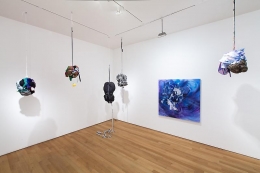 In Paul D. Miller’s (aka DJ Spooky) catalogue essay for the artist’s 2010 solo exhibition at MoCA North Miami, he describes Shinique Smith’s unique ability to synthesize media into “cubes of consciousness rendered into oblique strategies of envisioning, making the anonymous spaces of urban life become illuminated manuscripts of the here and now.”

Shinique Smith is inspired by the vast vocabulary of things we consume and discard. Examining the ways in which these objects resonate on a personal and social scale, Smith pursues the graceful and spiritual qualities of the written word and the everyday. In this new body of work, a free flow between paintings and sculptures ruminates on the interplay of chaos and restraint, balance and connection, and what is revealed and concealed.

In the exhibition Bold as Love, installations in each of the three gallery spaces trace a distinct phase of a conceptual journey. A central energizing motif throughout is the mandala, a form chosen for its geometry, both sacred and mathematical, and as a tool for fusing the visceral with the cerebral. The front gallery serves as a place of transition, an antechamber where calm and intensity harmonize in denim painted with bleach and in relief. Paintings and sculptures in the main gallery are installed in pairs and larger groupings. The potential energy bound within Smith’s hanging sculptures finds its kinetic expression in the gestural texts of her canvases. Ratios of the human body are referenced by impressions of the artist’s form both on large-scale paintings and in sculptures, stuffed and created from her own dresses. The exhibition culminates in the back gallery with an immersive environment featuring clustered hanging sculptures whose tethers drape to the floor in spiraling script.

As artist Kehinde Wiley observes, “The work of Shinique Smith navigates the leading edge of the written word. Her installations of extremely mixed visual signifiers marry literature, Islamic architecture, and hip hop music to investigate and expound the narrative capabilities of the language.”

exhibitions in 2013, Shinique Smith has been commissioned by New York City’s MTA Arts for Transit to create a permanent public work at the new Mother Clara Hale Bus Depot in Harlem (Lenox Ave and 146th Street). This extensive project features a large-scale mosaic across the façade and laminated glass windows throughout overall measuring 6,672 square feet of artwork. exhibitionsly on view Shinique Smith: Firsthand, a collaboration with LACMA and the Charles White Elementary School including Smith’s new work based on her experience within the school and community, art produced by students, and objects the artist selected from LACMA’s Costume and Textile collection. Also in 2013, Birmingham Museum of Art in Alabama has commissioned Smith to create a large-scale sculptural installation for Etched in Collective commemorative exhibition for the 50th anniversary of the 16th Street Baptist Church Bombing, opening August 18, curated by Jeffreen Hayes. A solo exhibition will be mounted at the Museum of Fine Arts, Boston from October 2014 to March 2015, curated by Jen Mergel.

SHINIQUE SMITH lives and works in Hudson, NY. exhibitions solo exhibitions include MoCA, North Miami, Madison MCA, Studio Museum in Harlem, and Boulder MCA. The artist’s work is included in the collections of Brooklyn Museum, Denver Art Museum, Los Angeles County Museum of Art, Studio Museum in Harlem, and Whitney Museum of American Art, amongst others. She was a fellow of Joan Mitchell Foundation in 2008 and Skowhegan School in 2003.

For further information, please contact Jane Cohan at jane@jamescohan.com or by telephone at 212.714.9500.