Omer Fast’s work provides an intentionally-uncomfortable look inward — both at himself, an immigrant to the US, and at the Gallery, a new arrival to an established neighborhood. That this work would generate such a variety of strong reactions — positive and negative, reinforces the paradox it is trying to capture. We not only take these expressions seriously, we’ve tried to honor them. People are free to draw their own conclusions about art, but they should also be given the opportunity to do so — without censorship, barriers or intimidation.

As part of my first exhibition at James Cohan’s Chinatown gallery, I decided to transform the facade and interior in a symbolic and temporary act of erasure. I wanted to erase the passage of time and to recreate what the space looked like before the gallery moved in almost two years ago. The tall glass facade and white-cube interior would disappear and the space would lose its more recent identity as an upscale gallery. The back spaces, where the gallery’s business takes place, were left untouched. No one working there was asked to perform or do anything different. As such, there was nothing radically transformative about this intervention since it was neither disruptive nor permanent. I’m aware how superficial such a formal transformation might seem, but I was precisely interested in this conflict between appearance and essence.

As a teenage immigrant to the United States and a naturalized American, I’ve long felt the tension between appearance and essence. I know many first- and second-generation immigrants experience the same challenge: how to reconcile a foreign identity with a local one, how to connect old and new, outward facade and inner space. In the case of the intervention at James Cohan, the actual gallery is being used as an immigrant surrogate: a transplant that tries to affect an appearance and blend in, even while its essence is undeniably foreign. I suspect many of the critical reactions to my work have a lot to do with this tension between appearance and essence.

I’m not surprised there have been critical reactions. I completely understand people’s need to push back. We all have unseemly baggage, racist and otherwise, that needs to be sorted through. We all overstep bounds and must shine a light on our darker hypocrisies, myself included. For good and for bad, artists do this in public. But I am surprised and distressed by the vitriol and name-calling. A group of protestors hanged a large poster outside the show, which accuses the gallery of representing “a non-US and non-New York artist.” I expect this sort of characterization from right-wing trolls carrying tiki-torches and howling for walls to be built. I don’t expect it from left-wing activists in lower Manhattan.

This doesn’t mean that displacement and gentrification are not happening, nor that artists and galleries do not contribute to these processes, nor that I’m somehow magically free from prejudiced thinking and above all that. I’m truly sorry that some persons find the installation insensitive or offensive. The point of this work was never to insult or incite but to talk about identity and immigrant experience - my immigrant experience - warts and all, in its complexity and in its contradictions, pitting essence against appearance. For what it’s worth, I think this is what this work does. I’ve asked the gallery not to take down the protesters’ posters. I disagree with their statements about me and my work but I think they’re important to consider as part of a larger picture. 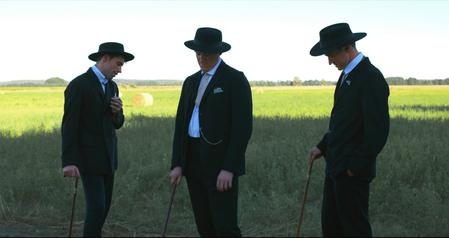 PRESS RELEASE
James Cohan will present an exhibition by Omer Fast on view from September 16 through October 29, 2017 at the gallery’s Lower East Side location. This show is Fast’s second solo exhibition at James Cohan. An opening reception will be held on Saturday, September 16 from 6-8 PM.
The exhibition presents the New York premiere of August, a 3D digital film inspired by the life and work of renowned German photographer August Sander, celebrated for his masterful portraiture in People of the Twentieth Century. In his 15-minute fictional film, Fast offers a dark portrait of Sander at the end of his life, nearly blind and haunted by the memory of his son who died as a political dissident in a Nazi prison.
August examines Sander as both visionary and powerless, exposing an entanglement between these states and inviting viewers to reconsider the relevance of image-making in the context of political crisis and personal loss. During a hallucinatory flashback, a Nazi officer quotes Walter Benjamin (who himself quoted Goethe) in praising Sander’s work as “delicately empirical.” Both critic and fan, the officer appreciates the irony of his remark when presenting himself as a subject for Sander to photograph – and the artist obliges
In addition to the presentation of August, Fast will transform the gallery facade and interior into what they were like before gentrification: the waiting room of a Chinatown business with an eclectic aesthetic. In a very tense political climate, this ambiguous gesture represents a futile attempt to roll back the clock and speak about community, citizenship and identity. What makes us authentic or assimilated? Is it enough to put on appearances? If we look and act the part, are we more acceptable in a neighborhood? In a town? In this country? This immersive ficitional space continues Fast’s preoccupation with role-playing and time travel. In his recent solo exhibition Talking Is Not Always the Solution at the Martin-Gropius-Bau in Berlin, Fast presented works in spaces alternating between cinematic black-boxes and life-sized dioramas referencing institutional waiting rooms. This exhibition further delves into a theatrical use of space, turning the gallery facade into an impostor striving to emulate its local milieu. An earlier work by Fast, Looking Pretty for God (After G.W.) (2008), will be on view in the waiting room. Looking Pretty for God is a straightforward documentary about funeral directors. Nevertheless, while the camera explores the largely empty funeral homes where these men work, little children sometimes appear and explain what the viewer is seeing. The aestheticization of death, for both Fast and his mortician subjects, represents yet another entanglement of the visionary with the powerless.
On Sunday, September 17 at James Cohan’s Lower East Side location, Fast will be in conversation with Noam Elcott, Associate Professor of Modern and Contemporary Art and Media at Columbia Univeristy.  Elcott is the author of Artificial Darkness: An Obscure History of Modern Art and Media (University of Chicago Press, 2016), winner of the 2017 Society for Cinema and Media Studies (SCMS) Anne Friedberg Innovative Scholarship Award, as well as essays on art, film, and media, published in leading journals, anthologies, and exhibition catalogues. His current book project is Art in the First Screen Age: László Moholy-Nagy and the Cinefication of the Arts (University of Chicago Press).
The exhibition will coincide with a presentation of August at the Minneapolis Institute of Art, on view from September 24, 2017 through February 18, 2018 and a screening of Fast’s recent feature films Remainder and Continuity at the Walker Art Center on Sunday, September 24. On Friday, September 15 MoMA will host a second annual symposium on the work of August Sander as part of the August Sander Project, an initiative by the Museum in conjunction with Columbia University.
Omer Fast (b. 1972, Jerusalem) grew up between Jerusalem and New York. In October 2015, a monographic exhibition of Fast’s work titled Present Continuous opened at the Jeu de Paume, Paris, and subsequently travelled to the Baltic Center of Contemporary Arts, Gateshead, UK, and the KUNSTEN Museum of Modern Art, Aalborg. Denmark. He has been the subject of solo exhibitions at the La Caixa, Madrid; Musée d’Art Contemporain, Montréal; Museum of Contemporary Art, Krakow; Dallas Museum of Art, TX; Cleveland Museum of Art, OH; the Martin Gropius Bau in Berlin; and the Minneapolis Institute of Art, MN. His work was featured in dOCUMENTA (13), the 54th Venice Biennale, and the 2002 and 2008 Whitney Biennials. He received a BA from Tufts University and a BFA from the Museum School of Fine Arts, Boston, as well as an MFA from Hunter College in New York City. Fast lives and works in Berlin, Germany.
Please conatct Jeffrey Waldron at jwaldron@jamescohan.com or 212.714.9500 with press inquiries.
For further inquiries regarding the exhibition, please contact David Norr at dnorr@jamescohan.com or 212.714.9500.
Download PDF 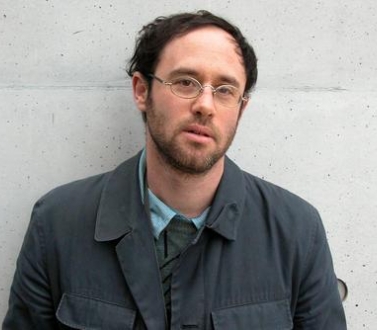