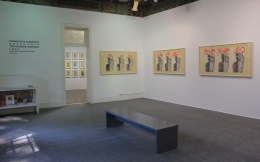 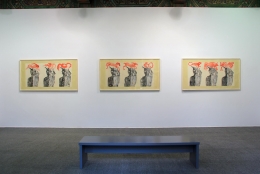 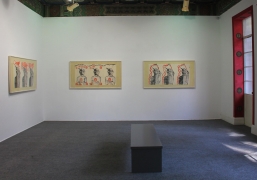 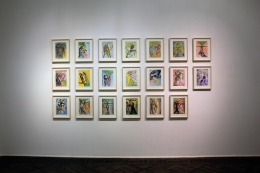 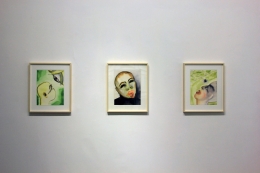 James Cohan Gallery Shanghai is pleased to present an exhibition by Francesco Clemente, The Chinese Shadows, opening on Friday, March 14th and continuing through Sunday, April 13th. This is the artist's second solo exhibition at the gallery in Shanghai.

During the artist's first visit to mainland China in 2012, Clemente created a dynamic series of thirteen unique hand-painted monotypes, utilizing watercolor, gouache, and ink on traditional Chinese paper mounted to silk. Clemente, who is equally acknowledged as a master of various printmaking practices over the course of his career, occasionally engages printmaking technics to explore or further extend the ideas of serial imagery. He is also widely acclaimed and recognized for revitalizing the art of portraiture and, in particular self-portraiture, which the artist began to develop more intensely by the mid 1970s. For Clemente, the self-portrait is a means towards deeper introspection of the psychic imagination, reaching far beyond a formal or technical likeness. The self-portraits, as well as in the many portraits of others he has painted over the years, are essential to the understanding of artist's vision and personal cosmology. In The Chinese Shadows monotypes, Clemente has created a cohesive, sequential body of works that address the metaphysical or mythological self and the ancient Chinese philosophical principles of the universe yin (associated with the female, earth, dark, and cold) and yang (male, heaven, heat, and light) as a composite of the human spirit. Familiar motifs of Chinese life and culture are featured: flowing red ribbons, pomegranates suggesting small handheld lanterns, and four monotypes that feature the twelve heavenly creatures of the Chinese zodiac. The transformative juxtaposition between human and animal has been an ongoing theme the artist has continually explored throughout his career. Adhering to a defined palette of red, black and shades of gray, The Chinese Shadows exemplify the artist's astute awareness and knowledge of China's long traditions of both ink painting and supernatural storytelling.

Francesco Clemente, born in 1952 in Naples, Italy, is widely recognized as a defining contemporary artist for the past four decades who has established an extraordinary, singular pictorial language that draws on timeless symbols, mythologies, cultures, and philosophies. The diversity of the artist’s chosen mediums— paintings, frescos, watercolors, pastels, collage, and gouache—and the themes and subject matter of his works have been deeply informed by Clemente’s nomadic artistic life.

Since the early 1970s the artist has continually traveled between Italy and India where many of the works in this current exhibition were made. He continued to travel to India, after settling in New York with his wife and family in 1980, where Clemente quickly became a vital member of the community of artists and writers. He collaborated with close friends, notably the poets Allen Ginsberg and Robert Creeley, and in 1981, reacting against a wave of anti-painting sentiment among critical circles, Clemente initiated a series of collaborative paintings with Jean-Michel Basquiat and Andy Warhol. The openness to collaborating with other artists combined with his experimental practices contributed to Clemente becoming a rising star of the international art world. His works were soon exhibited at both Documenta 7 in 1982 and the Venice Biennale in 1988, 1993, and again in 1995. Major solo museum exhibitions followed at the Nationalgalerie Berlin (1984), Centre Georges Pompidou, Paris (1994), Solomon R. Guggenheim Museum (1999), MADRE Museum, Naples (2009), and more recently at Schirn Kunsthalle, Frankfurt (2011) and Uffizi Gallery, Florence (2011). It has been said that Clemente’s conviction in his role as an artist is a kind of universal witness of consciousness. He came of age as an artist during a time when the call for a renewal of consciousness was the anthem of the day, which also points to the origins of his artistic inclinations: “The original impulse in my life as an artist,” Clemente has said, “was to write and to break from writing into image.” He has since then pursued arresting and indelible images which bring about an increased realization of the need to break with established notions of Self in order to expand awareness. This imperative, which continues, and his unflagging interest in philosophy and spirituality took Clemente to India for the first time in 1973. He would spend more than half of the 1970s, at irregular intervals, in the southern city of Madras, present day Chennai, and traveled extensively throughout the country. It was not long before Clemente set up a studio and had begun collaborating with local artists and exchange ideas with members of the Theosophical Society there. It can also be said that Clemente’s work and life continues to expands on multilayered records of experience, each place having its own influence on the works created at any given location, becoming an embarkation point for an ongoing visual memoir that encompasses simultaneously a profoundly personal and yet universal journey. 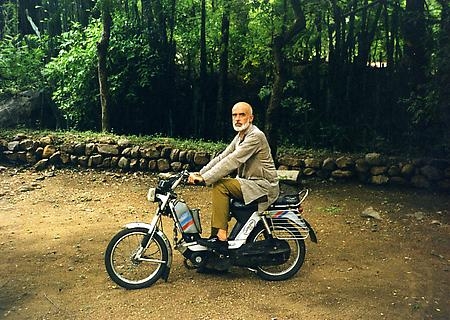 Francesco Clemente's oeuvre spans four decades and has achieved international acclaim. Throughout the 1970s he exhibited works that reflected his interest in the contemplative traditions of India, where he lived several years. In 1981 Clemente moved to New York with his wife and four children. His paintings, drawings, prints and illustrated books have been subject of numerous important traveling exhibitions. Clemente has illuminated poetry by Robert Creeley, Allen Ginsberg and Rene Ricard, and is a member of the American Academy of Arts and Letters.