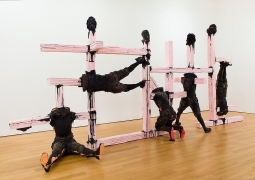 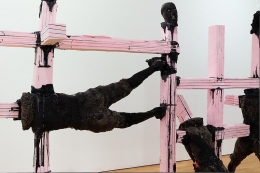 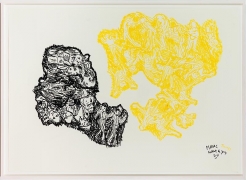 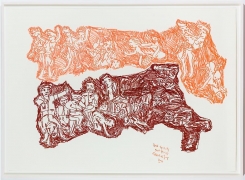 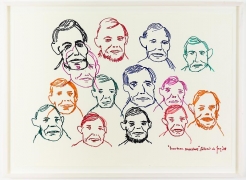 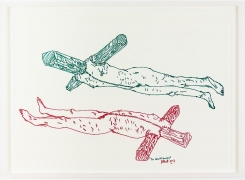 James Cohan Gallery New York is pleased to welcome the return of Dutch sculptor Folkert de Jong for the artist’s third solo exhibition Operation Harmony opening on April 1st and running through May 7th, 2011. Following his solo exhibition last year at the Groninger Museum, his inclusion in the Sydney Biennial 2010 and in anticipation of the sculpture exhibition The Shape of Things to Come at the Saatchi Gallery opening in May, for which his work is the cover image, Folkert de Jong’s career has been firmly launched on the international stage.

De Jong employs the contemporary industrial materials Styrofoam and polyurethane foam, well understood for their inherent contradictory properties of cheapness and indestructibility, to create sculptural tableaux of what can be considered anti-monuments that conflate the exhibitions and the present.

There are two central works in the exhibition. The first is the monumental scale installation, Operation Harmony, 2008, measuring 23 feet long, which will be seen for the first time in the United States. This work is inspired by both Jan de Baen’s painting “The mutilated corpses of the de Witt brothers, hanging on the Vijverberg in the Hague” from 1672, which depicts the gruesome scene of the strung up bodies of two brothers executed for their political beliefs, and the “harmonious” grid structure found in Piet Mondrian’s modernist paintings. The title of the work Operation Harmony is borrowed from the optimistically named Canadian forces that were deployed in Bosnia in 1992 to help keep the peace. The artist has an unsettling ability to combine such period perfect details as lace neck ruffs from Vermeer’s Golden Age paintings, together with the dense blackness of the oozing “blood” and “charred” bodies that are spliced onto the sickly pink foam scaffold and the delicacy of the hand-carved teeth and eyes of the decapitated heads. De Jong, as the writer Lilly Wei aptly describes, “zooms in on the double-edged and cultivates contradictions. Combining the comedic and the grotesque, he leads viewers, with charming stealth, to contemplate the horrors that are so frequently his subject.”

The other central piece The Balance II, 2010 is second version of a work that de Jong created for the Sydney Biennial 2010. The tableau depicts Dutch traders swindling the Native Americans out of the island of Manhattan for beads and whiskey. The grinning traders are doing a jaunty dance as they balance on the artist's signature industrial oil barrels and wooden pallets as they show off their wares. Writer Michaël Amy succinctly explains, “Long-established traditions are toppled by this irreverent young Dutchman, the works of cherished masters are hopelessly disgraced, and revered subjects are corrupted through and through. De Jong’s the tactless jester, part moralist, part sadistic clown, who holds a mirror up to our eyes.”