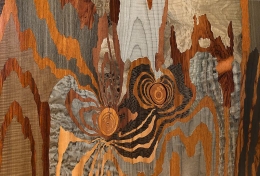 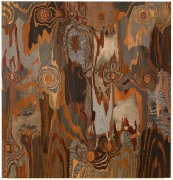 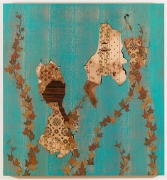 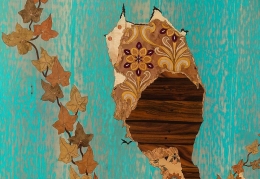 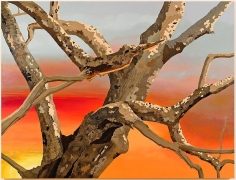 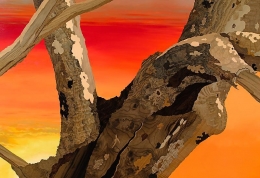 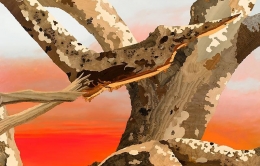 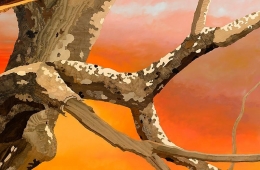 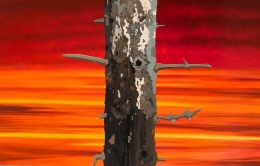 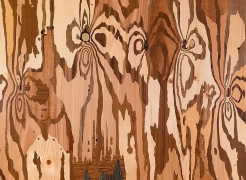 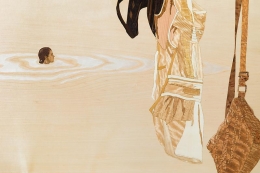 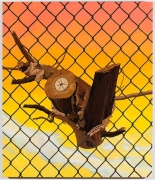 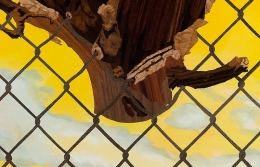 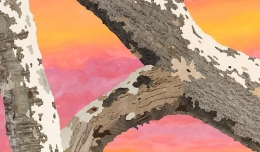 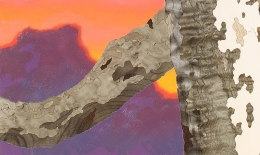 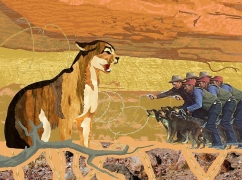 Brooklyn-based artist Alison Elizabeth Taylor returns to James Cohan Gallery for her fourth solo exhibition Surface Tension. After working for several years within the boundaries of the limited palette afforded by natural woods, Taylor, in this body of work, mashes marquetry and paint in unprecedented ways creating a new perspective on painting. Taylor explains, “What interests me is a new type of surface created by the contrast of the textural qualities of the wood and the depth afforded by the paint. I found this tension was just what I needed to convey the otherworldly feeling I encountered in real life when I observed how nature adapts and mutates to accommodate encounters with the ever-encroaching urban environment.” Taylor’s meditations on the relationship between humanity and nature take place amongst the urban grit; in Van Cortlandt a tree produces a tumorous growth over a metal plate; in Brooklyn Navy Yard a tree stump is entangled in a chain link fence; in Kelso ivy infiltrates an interior wall; in Laocoon a broken-branched tree is set off by the brilliant colors of a polluted sky.

Inspired by Emerson’s exhortation to become a “transparent eyeball” so as to connect with nature and thereby the universal without the blinders of the ego and self, Taylor attempts to be that observer. Walker Evans’ work extended the concept to the camera, a notion Taylor follows in the work Transparent Eye, when she chooses to include the lens flare as captured by her camera’s digital technology when shooting a sunset.

Here, nature is both the subject and the stand-in. Taylor's sunsets and rugged trees suggest a new concept of the urban sublime. Henry David Thoreau advises “Really to see the sun rise or go down every day, so to relate ourselves to a universal fact, would preserve us sane forever.” In Surface Tension, Taylor assures us that we can still transcend the world we’ve built ourselves even when the brilliance in the sky is chemically enhanced.

Raised in Las Vegas, Nevada, Alison Elizabeth Taylor received her M.F.A. from Columbia University, Graduate School of the Arts in 2005. Her work has recently been purchased by the Crystal Bridges Museum of American Art and is included in the collection of the Brooklyn Museum of Art, which is exhibitionsly on view in the exhibition Unfolding Tales: Selection from the Collection (2013). exhibitions in February 2014, Taylor’s work will be included in the First International Biennial of Contemporary Art of Cartagena de Indias, in Colombia. In June 2015, Taylor will mount a solo exhibition engaging with the architecture and historical furniture at the Musée Historique, Chateau de Nyon, Lake of Geneva, Switzerland.