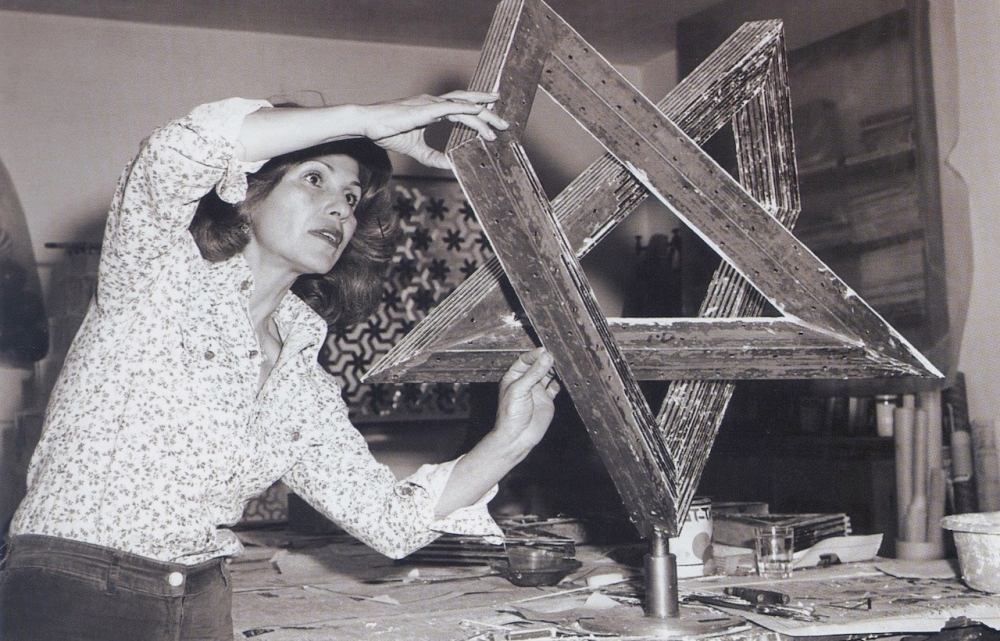 James Cohan is delighted to announce its representation of Monir Shahroudy Farmanfarmaian. The gallery will present a two-part solo exhibition of Monir’s work in January 2021.

Over six decades, Monir Shahroudy Farmanfarmaian (1922 - 2019) investigated the intricate geometries of her Iranian heritage, reconfiguring traditional craft techniques to explore the philosophical, poetic, and perceptual possibilities of interlocking primary forms. In her work, rigorous structure and repetition are the foundations of invention and limitless variation. Spanning mirrored mosaics, sculptural assemblage, drawings, textiles and monotypes, Monir’s multidimensional practice centered on incorporating elements from her inherited past into her own designs—which blended a range of compositional influences, from classical Persian interior decoration to Western modernism.

Monir is best known for her mirror-works, in which cut polygonal fragments of reflective, reverse-painted glass are arranged into kaleidoscopic compositions grounded on principles of Islamic geometry. While studying and living in New York after World War II, Monir became embedded in the social fabric of the Western modernist art scene. It was there she befriended figures such as Milton Avery, Alexander Calder, Joan Mitchell, Louise Nevelson, Frank Stella, Robert Morris, and Andy Warhol. In 1957, she returned to Iran, embarking on intensive research into regional artistic and architectural tradition. During this time she was introduced to Āina-kāri, the 16th-century Safavid practice of cutting mirrors into small pieces and arranging them into decorative shapes over plaster. Inspired by a formative visit to the mirror mosaics of Shah Cheragh mosque in Shiraz, Iran, her visually seductive wall-based and freestanding sculptures draw from the mathematical, corporeal, and mystical principles of Sufi architecture as much as they are informed by the conceptual underpinnings of 20th century abstraction.

Tied to a mystical understanding of primary shapes as sacred and connected to a divine natural order, Monir’s unit-based compositions of luminous glass reveal uniformity, repetition, and precedent as the basis for endless recombination. Dissecting and reassembling the traditional surface construction of the mirror-mosaic, each of her works is anchored by central polygons, whose numeric properties have symbolic meanings in Islamic design and Sufism. According to Monir, the six-sided hexagon, for example, “reflects the six virtues: generosity, self-discipline, patience, determination, insight, and compassion.” The distinctive features of shapes used in each work precondition specific repetitive geometries that span outward to the edges of the object, serving to create a transcendent, ephemeral effect within the larger structure. Her methodologies often invoke concepts central to Minimalism—such as seriality, modularity, and diagrammatic organization—manifesting in bodies of sculpture grouped into series she called “families,” suggesting an affinity of structure, for example, or which are “convertible,” consisting of elements that can be arranged into a number of different formations. Layering these contemporary ideas with an Islamic integration of mathematics with bodily presence and spirituality, her work reconnected abstraction with its theological roots to invite sublime perceptual experience grounded in the body of the viewer. Monir explained: “With the reflections, you’re also a part of the art piece. Your own appearance, your own face, your own clothing—if you move, it is a part of the art. You’re the connection: it is the mix of human being and reflection and artwork.”

Drawing was an integral throughline in Monir’s wide-ranging practice, providing a means for exercising spatial thinking through experimentation with geometric structure. Certain drawings or studies correspond to eventual three-dimensional, sculptural applications of their forms, while others employ rhythmic patterning and calligraphic mark-making to create dimensional effects within the picture plane. Typically rendered in vivid hues of felt-tipped marker and colored pencil, Monir’s works on paper demonstrate her ability to cast fields of radiant, expressive energy from pared-down arrangements of line and form, through a process characterized by structural precision.

The Islamic Revolution in 1979 marked the beginning of Monir’s 26-year exile in New York. During this period characterized by distance, the artist's ongoing drawing practice played an increasingly critical role in reinforcing a vital sense of continuity and connection to her homeland. Finding herself indefinitely estranged from her studio and other resources necessary to continue producing large-scale sculpture, she honed connection with cultural memory through intensive exercises in drawing, collage, jewelry, carpets, and small-scale sculpture. Following the death of her husband in 1991, while still in exile, she also created sculptural memory boxes referred to as Heartaches, filled with family photographs and other personal ephemera. The assemblages reference lost homes and lost people comprising the fabric of her personal memories.

In 2004, Monir returned once again to Tehran, where she reaffirmed her place among Iran’s art community and continued to make sculptural work until her death in 2019. Over the course of a life marked by migration and revolution, she blended tradition with permutations in the avant-garde to create a cohesive and widely varied body of work that is uniquely her own. As curator Suzanne Cotter describes, each of Monir’s new sculptures “carries a history of the sculptures and drawings that have preceded it. With each new beginning comes a new progression whose formal expression of spatial unfolding and unity, while clearly acknowledging Sufi thought, might also be understood metaphorically as an existential portrait of the artist and her trajectory—to begin, advance boldly, and begin again.”

Monir participated in the 2009 and 1964 Venice Biennales, and represented Iran in the 1958 Venice Biennale, where she was awarded the Gold Medal for her contribution. Other recent biennials include the Bruges Triennial 2018, Belgium; the 11th Gwangju Biennale, South Korea (2016); the 2015 Vienna Biennale, Austria; Prospect.3 New Orleans, LA (2014); Sharjah Biennial 11: Re:emerge, Towards a New Cultural Cartography, Sharjah Art Foundation, United Arab Emirates (2013); and the 29th Bienal de São Paulo, Brazil (2010).