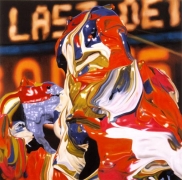 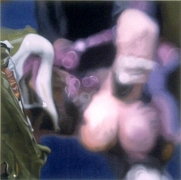 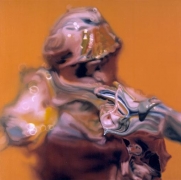 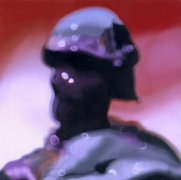 James Cohan Gallery is pleased to announce an exhibition of new paintings by British painter Richard Patterson. This exhibition of recent work marks the artist's first solo show in New York and coincides with Sensation: Young British Artists from the Saatchi Collection at the Brooklyn Museum of Art, in which Patterson is represented by four earlier paintings.

In this new body of work Patterson transforms a small three-dimensional toy soldier into an action figure of heroic proportions. The process of the transformation is central to Patterson's work. He begins with a toy soldier, layering the surface with paint thereby concealing and distorting its original form. After photographing the altered figure, in which he has manipulated both the scale and the focal point, Patterson meticulously paints images which attain, in one critic's words, "hallucinatory clarity".

There is an inherent contradiction in Patterson's painting. Employing a photorealistic style, they depict an abstraction. There exists a quality of "precise abstraction" that leaves one ambivalent about the figure's status in reality. While they are seductively painted, incorporating a lush palette, the figures verge on the grotesque. In Patterson's hands an innocent toy soldier mutates into a hauntingly surreal character.

Richard Patterson was born in Surrey, England in 1963. He attended Goldsmiths College in England and first came to the forefront of the British contemporary art scene in 1988, showing in the critically acclaimed exhibition Freeze. More recent exhibitions include: Sensation: Young British Artists from the Saatchi Collection organized by the Royal Academy of Arts in London in 1997; About Vision, a touring exhibition of New British Painting at Oxford's Museum of Modern Art in 1996; ACE!, an exhibition of the collection of the British Arts Council organized in 1996; among others. His paintings are included in numerous private and public collections in the U.S. and Europe. Richard Patterson lives and works in London.