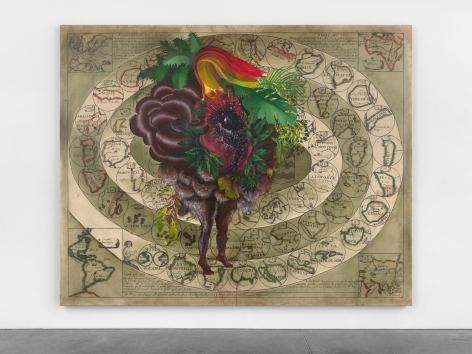 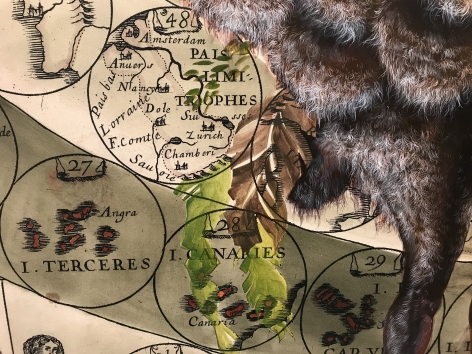 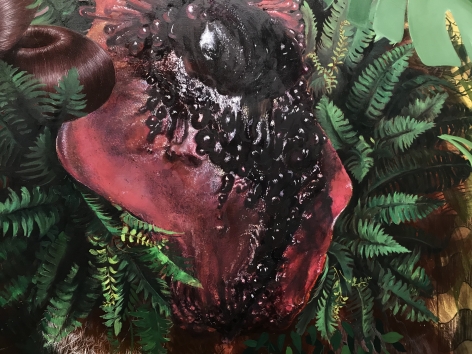 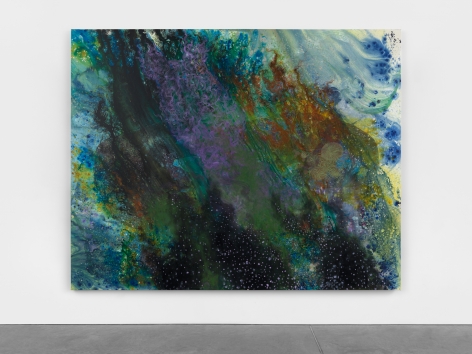 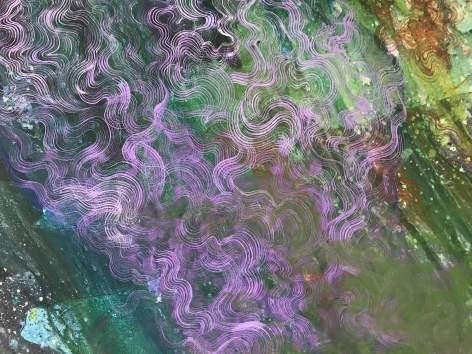 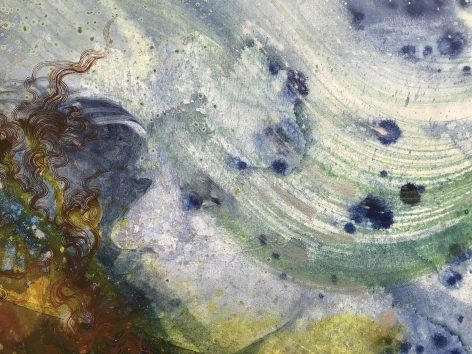 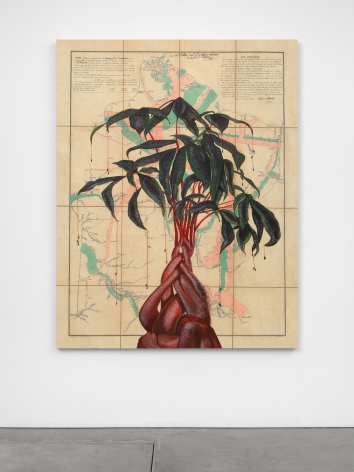 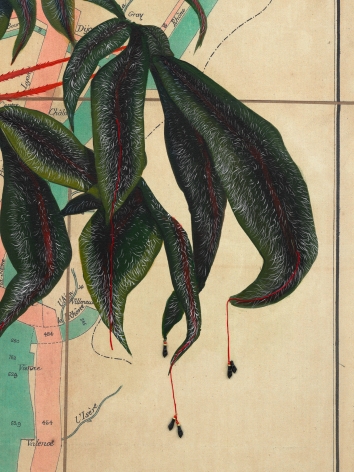 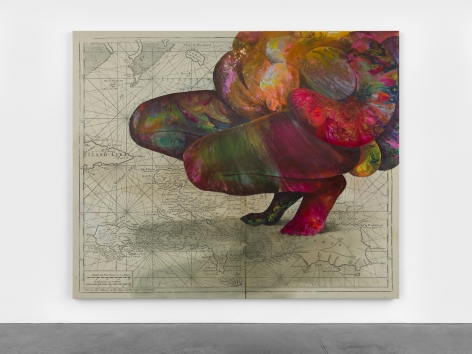 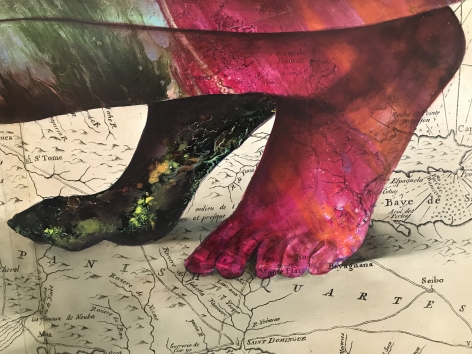 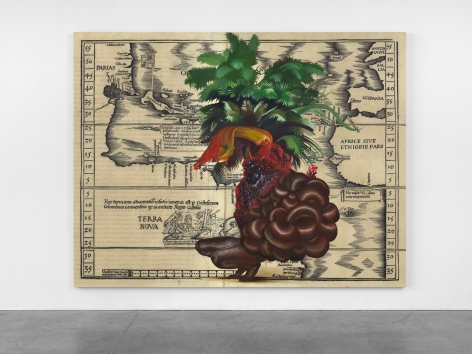 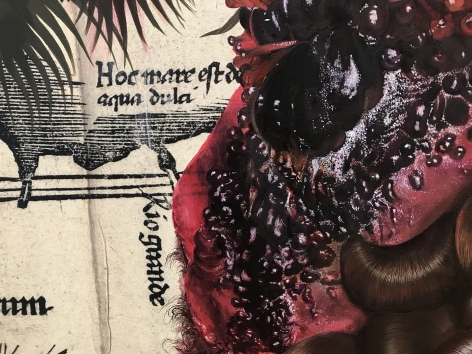 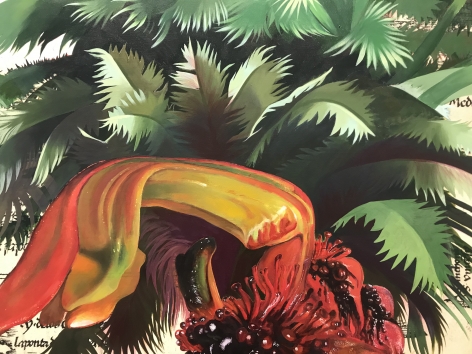 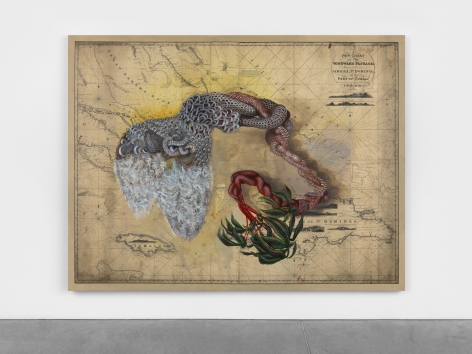 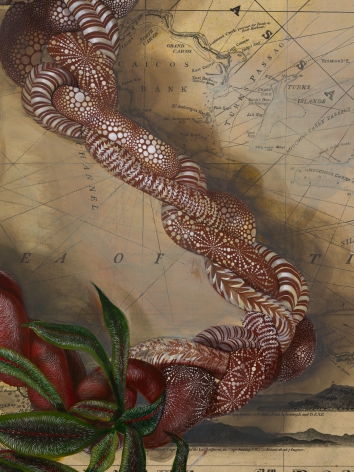 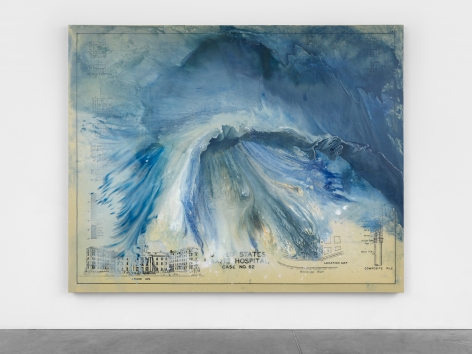 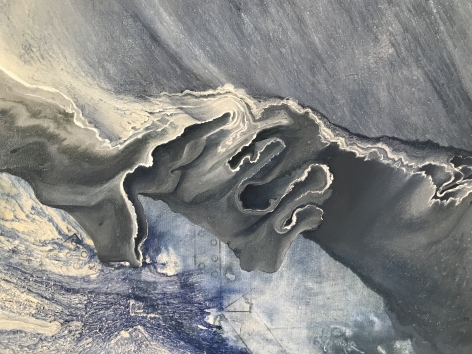 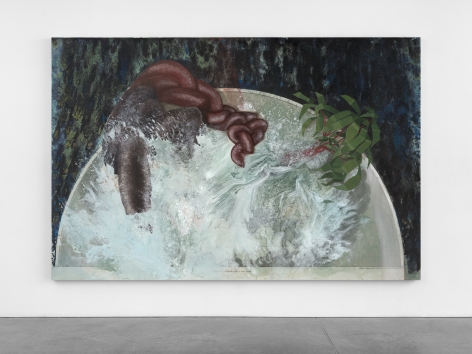 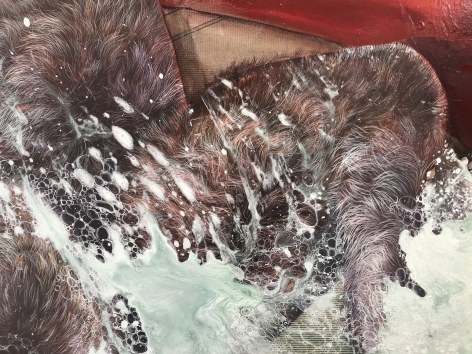 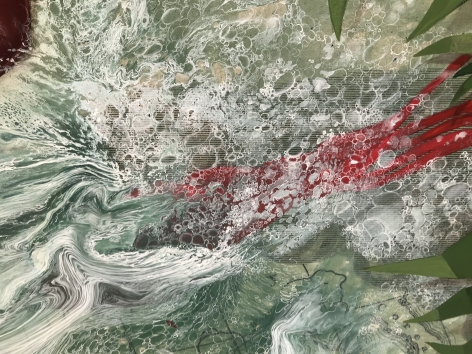 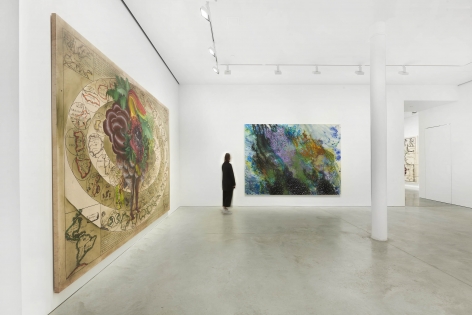 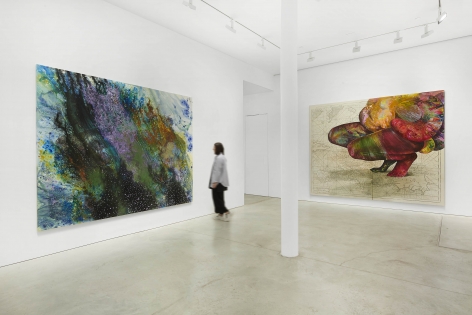 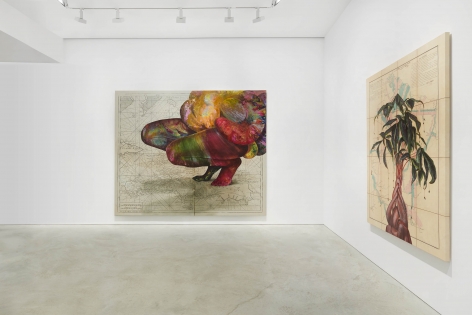 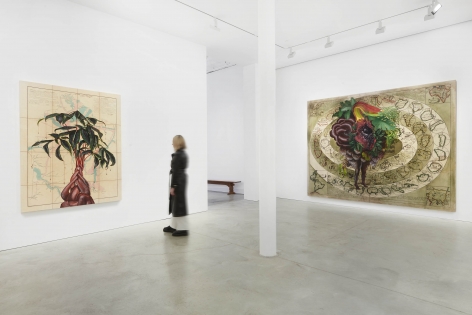 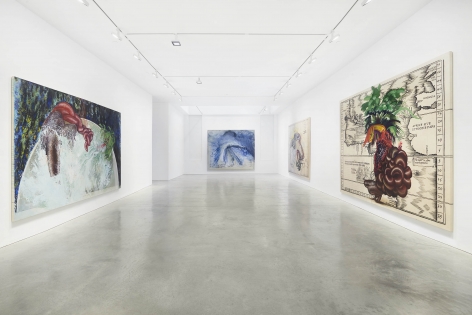 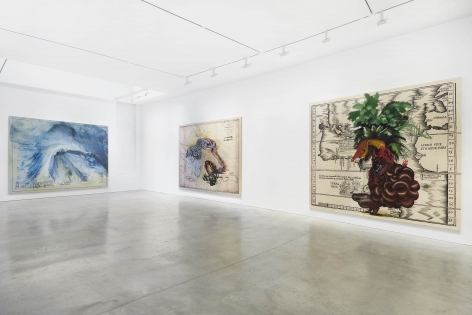 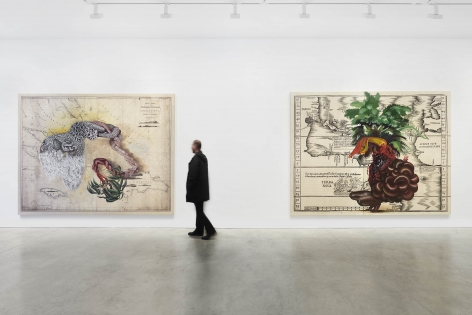 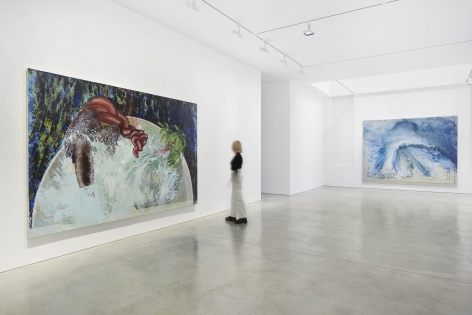 Please book an appointment to visit the exhibition.

James Cohan is pleased to present an exhibition of new paintings by Firelei Báez, on view from March 5 through July 2 at 48 Walker Street. This is the artist’s second solo exhibition with James Cohan.

Firelei Báez casts diasporic histories into an imaginative realm, re-working visual references drawn from the past to explore new possibilities for the future. Often depicting strong, shape-shifting female protagonists, her paintings incorporate motifs sourced from regional mythologies and historical artifacts alongside cues from science fiction and fantasy, to envision identities as unfixed, and inherited stories as perpetually-evolving.

Her second exhibition at James Cohan features new paintings in which figuration, symbolic imagery, and calligraphic gesture are overlaid onto large-scale reproductions of historical maps and documents. Driven by the migrant experience of navigating and articulating spaces that are both familiar and physically distant, Báez's new body of work is grounded in archival research into individual and collective modes of organizing space: the ways in which built infrastructure—and conceptions of place and community—reflect and reinforce social relations conditioned by gender, race, and class. For more than a decade, Báez has painted directly onto found cartographic or printed materials to disrupt the boundaries they serve to delineate. Questioning notions of past and present, mark-making and painterly gesture become means of situating subjugated personal memory and experience in dialogue with narratives of the Western tradition. The works in her exhibition carry forward this long-standing interest while upscaling source materials onto large-format canvas to allow for intervention in human-proportion.

With a goal to reclaim power, Báez populates these historically-loaded representations of space with change-making creatures—whose hybrid forms incorporate folkloric and literary references, textile pattern, plantlife, and wide-ranging emblems of healing and resistance—to present fictional alternative universes. Their empowered inhabitants defy the conventions of patriarchal narratives: in one work, Báez overlays a ciguapa figure with lustrous, manipulated hair and floral appendages onto an enlarged reproduction of the 1645 geographical game Le Jeu du Monde. The object of the game is to move from what is delineated as the outer edges of the world—Cuba, Mexico, Egypt—to the center (France) by rolling dice and moving each game piece from circle to circle on the map board. The feminine-archetypal ciguapa is a trickster from Dominican folklore who, for Báez, embodies the potential to defy oppressive convention and break through generations of karmic loads. Here, she stands at the center of the defined world, suggesting a rhizomatic alternative to hierarchies of place. Her very presence destabilizes the geographic notion of center and periphery.

In another work, a carnelian-hued figure crouches at the base of Terra Nova, an engraved atlas map from 1541 that depicts America as a vaguely-articulated landmass west of a central Oceanus Occidentalis (Atlantic Ocean) and the western coasts of Great Britain, Europe, and Africa. In this map, a Spanish flag floats over Cuba, and vignettes depict cannibalistic “Indians” and an opossum. Below Hispaniola—the artist’s birthplace—is a notation written in Latin describing its discovery by Columbus and its resources. Intervening in the extractive and exploitative mapping of “Spagnolia,” Báez renders a female character whose knotted hair sprouts leafy red fronds and orchid petals, obfuscating the hybrid figure’s torso and spreading their tendrils across this text.

Acknowledging the reciprocal nature of migration as a non-linear course of movement, Báez seeks to underscore streams of influence that are often overlooked, or stifled, by dominant and reductive understandings about migration that suggest a singular direction of transmission. In one painting, braided limbs and branches unfurl into tropical foliage upwards across a 1856 statistical map of France by Charles Joseph Minard that charts the flow of merchandise on railroads and waterways—grain, cotton, indigo—linked inextricably to the labor of enslaved people. Other maps within this exhibition chart patterns of movement and migrations, depicting trade routes across the Caribbean region that circulate not only commodities and bodies, but also ideologies and revolutionary precedent. By layering elements of cultural and historical circumstance to re-choreograph a new relationship with these channels of movement, Báez challenges legacies of capitalism and imperialism, underscoring subaltern transmissions to create possibilities for self-determination and alternate futures.

Firelei Báez (b. 1981, Dominican Republic) received an M.F.A. from Hunter College, a B.F.A. from the Cooper Union’s School of Art, and studied at the Skowhegan School of Painting and Sculpture. In 2020, Báez is shortlisted for Artes Mundi 9, and will be the subject of a solo presentation at the ICA Watershed, Boston, MA this summer. In 2019, the artist had solo exhibitions at the Mennello Museum of Art, Orlando, FL, the Witte de With Center for Contemporary Art, Rotterdam, the Netherlands, and the Modern Window at the Museum of Modern Art, New York. Her outdoor sculpture, 19.604692°N 72.218596°W, was included in En Plein Air, the 2019 High Line Art exhibition. Báez was featured in the 2018 Berlin Biennale, Prospect.3: Notes for Now (2014), Bronx Calling: The Second AIM Biennial (2013), and El Museo’s Bienal: The (S) Files (2011). Her major 2015 solo exhibition Bloodlines was organized by the Pérez Art Museum Miami and travelled to the Andy Warhol Museum in Pittsburgh.